The pair of feet in front of me beckoned.

I’d been closing in on their owner, a fellow swimmer in the Moreau Lake Open Water Swim 3K last Saturday, for the past few hundred yards. Now that I was upon them, I was excited to drift into the slipstream of their kick and draft for a little while.

Here’s the thing, though: I am so horrifically impatient, I couldn’t do it. I run into this problem every time I do an open-water swim: If I’m close enough to effectively draft someone, I get impatient and pass them, basically inviting them to draft me instead. And on Saturday, on the second loop of a two-loop course, that’s exactly what I did.

The swim was somewhat eventful from the start, when race organizers explained that the course was a bit longer than expected—about 2K rather than 1.5K. That delayed our start for about 20 minutes as we waited for the 1.5K swimmers to finish, and left plenty of time for us 3Kers to think about our own new distance of 4K, or about 2.5 miles. Several of us wimped out and changed into wetsuits (which race protocol allowed us wear) as we shivered on shore. 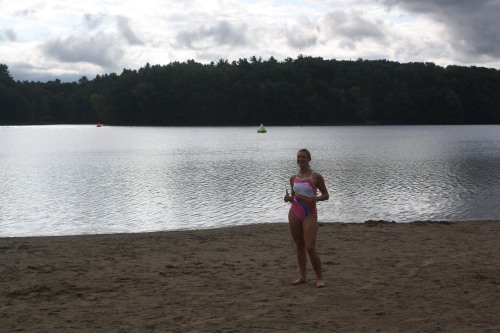 I’d planned to swim in my 80s-tastic swimsuit. I covered it with my wetsuit as we waited.

I had been eying past race results, wondering if I could be the first woman out of the water at this small, hometown race. I got that idea out of my head quickly once the race started, as three women zoomed to the front of the pack, which I almost immediately lost sight of. I’d been fighting a cold all week (forced taper, anyone?), and I spent the first 20 or 25 strokes wondering if this race was a bad idea.

As soon as I passed the first buoy, I forgot all about those worries, and got into a happy, steady groove. I’ve only been swimming at Moreau Lake since July, but it’s already acquired a special place in my heart, since I recently enjoyed what might be the best swim of my life there. There’s a good chance this will be my last open-water swim of the season, at Moreau Lake or elsewhere, so I stretched out and enjoyed it, even flipping onto my back and taking a few strokes looking at the sky, just to take in every aspect of the experience. I started feeling the benefits of swimming my “home course,” and recognized familiar landmarks as I lifted my eyes up to sight. I started passing other swimmers as I started the second loop, eventually catching up to my drafting buddy.

As I pulled my way in front of him, where I’d stay for the better part of the second lap, something crazy happened: The wind that had been quietly licking the shoreline all morning picked up, whipping tiny little Moreau Lake into a sea of whitecaps. Seriously—whitecaps. I halfway expected an Ursula-like figure to appear below me, angry at my inability to follow conventional race-day wisdom.

I never saw Ursula, or any other lake monster; just more whitecaps. I adjusted my stroke to avoid taking in a huge gulp of water every time I breathed. I finally resorted to alternating regular strokes with lifeguard-style strokes, with my head totally above the water. Gone was any hope of “stretching out and enjoying it;” I was battening down and getting through it (which I must admit is fun in its own way).

The chop died down as quickly as it began. I lengthened my stroke, discovering (unsurprisingly) that I was totally wiped out. I slipped behind the guy who was smart enough to draft someone through the hard part, and found myself more than willing to be patient as we headed toward the finish.

After a minute or two of slower swimming, I felt revived. Could I use up what I had left in the tank in the last 500 yards or so? I picked up the pace to pass my friend, thinking he’d slip behind me again. Instead, he stayed right by my side, matching me stroke for stroke. A race! 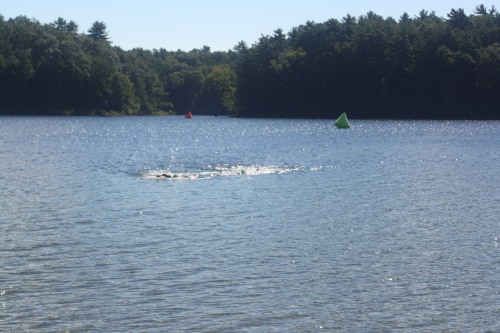 I slowly pulled ahead at the end.

We rounded the last buoy, me on the sharp inside turn, him on the outside. As we made the turn, his hand met my head, hard, as he took a stroke, pushing me into the buoy. “OW!” I screamed, more in surprise than any pain. “Sorry! Sorry! Oh!” he said in response, and we both kept swimming. I went into that crazy, grunty anaerobic state to the finish. 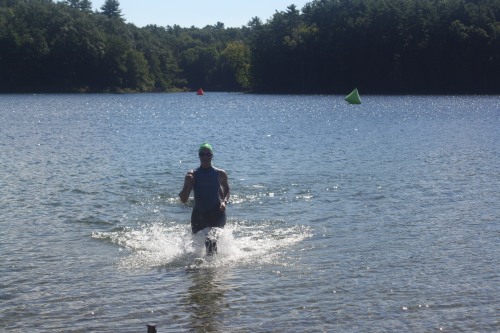 I grinned like an idiot as soon as I saw Steve with our camera on the shoreline.

I’m pretty sure my friend purposely backed off, and he finished a few seconds after me. We shook hands and congratulated each other on a good swim, and he thanked me for the ride through the waves. 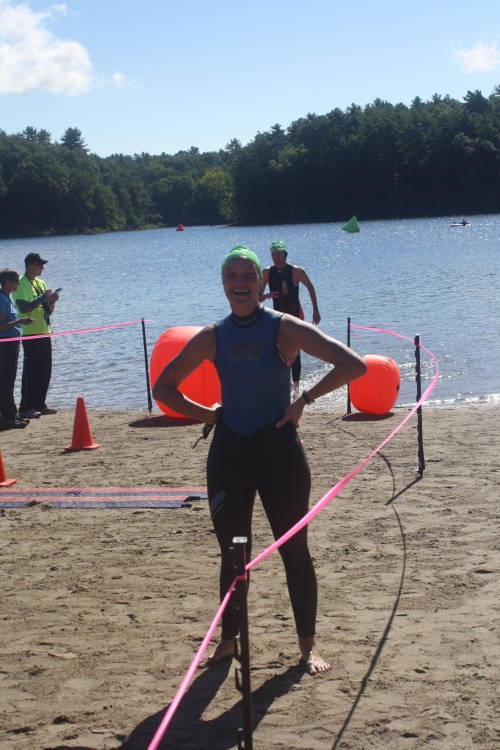 I finished in just over an hour, fifth out of the women, seventh overall. Given this super-speedy field, I’m extremely pleased. Even more so, I’m pleased at the way my mind performed at this race when conditions were not what I planned. Later start; longer course; faster field; choppier water; pre-race head cold—I accepted all of those things as if I’d chosen them, and rolled with my new reality without a snag.

Bottom line: This was a fantastically well-organized race (especially considering its diminutive size) at a gorgeous venue. I’ll definitely be back next year.

With the open-water swimming season over, I’m starting to look forward to that thing we do when the water freezes: skiing! Happy fall, everybody!