As soon as the eddy sucked me forward and toward the wave, I was off my board and falling into the chute again.

I grabbed my paddle, yanked on the leash attached to my stand-up paddleboard and swam back to the eddy, out of breath and deflated.

“We’re not leaving here until you get it,” said one of the kayakers lined up in the eddy, waiting for his own turn.

By “get it,” he meant “surf the wave at Virginia chute on a stand-up paddleboard,” which is what I found myself trying to do a week ago Sunday. This is a thing that people do, both on stand-up paddleboards and in kayaks—they paddle up to the wave, let it suck them in (“suck them in” is definitely the technical term), then surf it like they would a wave on the ocean.

My friend Buck, who got me into stand-up paddleboarding to begin with, brought me out there, and assured me I was ready for this challenge. He also warned me that I’d be “wrecked” after spending an afternoon on the river. After ferrying across our first current, I saw what he meant. Ferrying, or moving across a current by pointing your board or kayak at an angle to avoid being swept downriver, requires paddling your heart out and leaning on the downriver side of your board until you’ve made it across. It is heart-stopping and terrifying and exhilarating, and feels a little bit like running hills—if there were a chance you’d fall off the hill and hit a rock if your running form gave out. We did that a few times, then reached the Virginia chute.

I didn’t count how many times I fell before I got into the wave. And when I got it, I was on my knees, and lasted in the wave for about seven seconds before my board and I got sucked back out the other side. Still, it was revelatory—my body rewarded me for meeting the challenge with a steady stream of endorphins that seemed to last all day. And when I got back to “regular” life, I felt a little more strong and a little less scared than I was before. 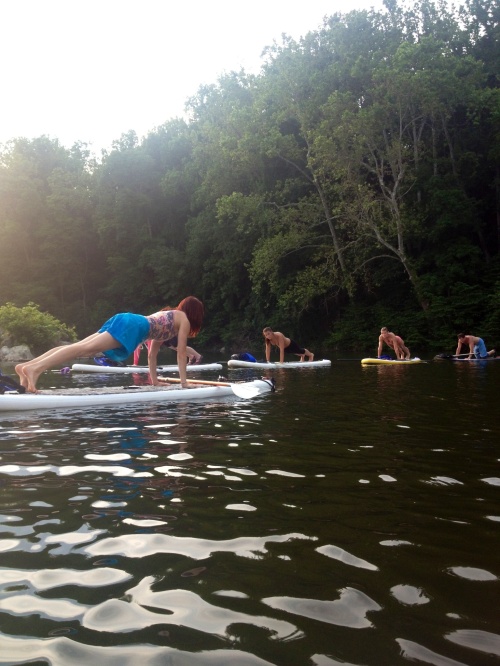 One response to “Motivation Monday: The challenge/river-surfing edition”