Back in March, when I was just beginning physical therapy after an ACL tear, I wrote a post about how I was inspired by something Tim Tebow said as University of Florida’s quarterback. I worked in Gainesville for most of Tebow’s years at UF, and I noted in the post that he’s an athlete I love to hate and hate to love and still somehow ended up quoting prominently in my blog.

But as I prepare to road-trip to Columbus, Ohio, with Steve this weekend to watch our beloved University of Colorado Buffaloes take on the Ohio State Buckeyes, I realized I would be remiss if I didn’t also write about an athlete who inspires and motivates me more than Tebow ever could. And I’m not even talking about CU grad Kara Goucher (in the running world, this is like saying Peyton Manning was my school’s QB while I went there, right?).

I’m talking about CU’s senior running back Rodney “Speedy” Stewart, whose 191 yards last weekend (he rushed 19 times for 98 yards, and also caught seven passes for 93 yards) helped propel us to our first victory of the season over our in-state rival, Colorado State University. You’ve probably already deduced that this means we’re not having a winning season. We haven’t for a while. 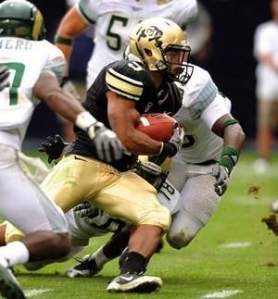 But I’m not writing about Stewart because of his stats, or our season, or for any reason other than that he’s 5-foot-6—an inch shorter than I am—and 175 pounds, and routinely goes toe-to-toe with 300-pound monsters and *wins.* He reportedly bench-presses 400 pounds. It’s unlikely he’ll play after college, which makes his successes even more impressive—he’s playing for the pure joy of the game, not for some potential future paycheck. He’s an inspiration to underdogs everywhere, including me.

Stewart is from Westerville, Ohio, less than 30 minutes from Ohio State, but recruiters there didn’t give him a second look. I have a feeling this game will be an emotional one for him. A fun plot twist? Our new coach, Jon Embree, *was* recruited by Ohio State … but his recruiting trip convinced him he’d be better off closer to home, and became part of national-championship-winning CU Coach Bill McCartney’s first recruiting class (according to this Denver Post story).

Not inspired by Speedy? How about our mascot, Ralphie?

Yeah, that’s right—our mascot is a live freaking buffalo. It takes several dudes running at full speed to steer her across the field. Each of those dudes gets a scholarship. Fun fact? I wrote a story about the Ralphie program as one of my first stories for the school paper.

Wish us luck this weekend!