Runner-friendly recipe: Spicy red-pepper hummus (subhed: I went to Columbus, and all I got was this lousy hummus recipe)

If you’re a college football fan, you already know the game I referenced in my post on Friday didn’t end quite as we’d hoped. 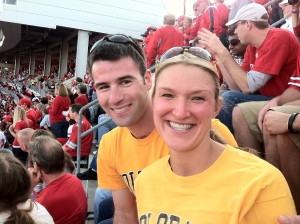 CU's loss was not a result of our lack of willingness to show our school colors in enemy territory.

But I didn’t leave Columbus empty-handed, and managed to snag a recipe for what was billed as “the best hummus I’ve ever eaten” by our waitress at Cap City Fine Diner, a diner serving fancy-pants versions of traditional diner favorites.

I have this theory that hummus contains some sort of magical healing property for runners, which would explain why we’re all so obsessed with it (admit it—I’m not the only one who considers it a food group). So when I determined that Cap City’s red pepper hummus was, in fact, better than anything I currently make at home, I asked for the recipe—and got it! I’m sharing it with you here.

I'm smiling because I know how to make this at home.

This is tweaked ever-so-slightly for two reasons: The recipe I was given was 1. designed to make a gallon and a half of the stuff and 2. probably not intended for distribution. It’s how I’ll make it in my kitchen at home.

salt and pepper, to taste

Puree all this. Serve. Try not to eat the whole vat in one sitting.

That wasn’t our only score of the weekend, as we also stopped at the lovely and delicious Northstar Café before heading back to D.C. Sunday morning. CU fans have an ugly habit of, after suffering a loss on the football field, noting that we kind of still win at life, and I couldn’t resist wearing my “Sea level is for sissies” shirt from the Bolder Boulder 10K to express that.

Confession: This breakfast burrito was so delicious, and the restaurant so charming, I had to admit that Columbus was a pretty cool college town, too. 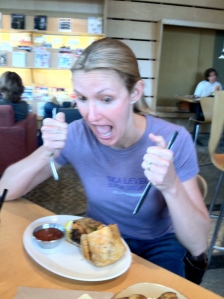 My breakfast burrito had sweet potatoes in it! And my T-shirt had smug state pride in it.

4 responses to “Runner-friendly recipe: Spicy red-pepper hummus (subhed: I went to Columbus, and all I got was this lousy hummus recipe)”