“If something looked inspiring or exciting, I would take note of that. And right behind that, the fear would come. And I would let it come. … Then, I would look back up at the mountain. If that even hint of excitement was still there, I would go and do it. And that has served me well.” — Professional freeskier Lynsey Dyer, during her wonderful TEDX talk about ‘extreme’ skiing

The screams from the stairwell were chilling, like a haunted house set up a couple of weeks before Halloween. Low and guttural, if you told me they came from a zombie staggering out of the grave, I would have believed you.

In actuality, they came from a practice patient in an advanced OEC (ski-patrol medical) clinic I took last weekend. The “patient,” another student’s husband, was told to pretend he had a broken femur, and it was my job to safely extricate him from the stairwell.

It was the first of many scenarios that day. It was also the first of several times that day that my brain went into overdrive, trying to find an answer amid a chorus of panicked expletives from my invisible terrible someone. 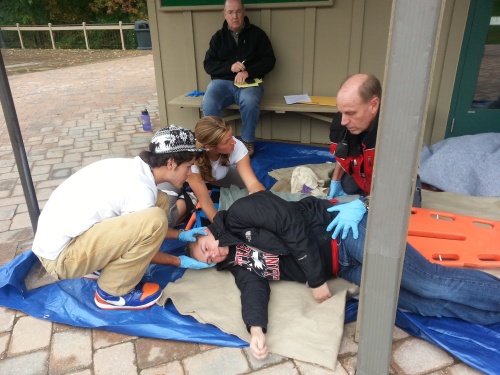 It was terrible, and humbling. It was also the best thing I could have done, and it made me a better patroller. Maybe even a better person, in that it reminded me that when you do things that force you to cut through the chatter and panic and other B.S. in your head, you sometimes find a calm confidence you didn’t even know you had.

If you’re curious about the outcome of the femur: The extrication didn’t go as smoothly as I’d hoped. But I got through it, and when I see that injury in real life, I know I’ll be able to handle it—maybe even with a quiet confidence I didn’t have before.

Have you done anything lately that scared you? How did it go?