For years now, I’ve viewed every successful endurance event in which I’ve competed as a victory lap.

Sometimes, viewing a race as victory lap means treating race day as a celebration of several weeks of disciplined training in which I’ve pushed my mind and body to their absolute limits. But just as often, it means celebrating the fact that I kept running through difficult circumstances; that I was kind to myself when life seemed unkind; and that I worked hard not to compare myself to others—including my past, faster self—and simply focused on running the mile that I’m in right now.

That’s the spirit in which I prepare for the Surf-n-Santa 10-Miler on Saturday. I signed up for the race in part because I wanted to relieve any pressure I may have felt on Philadelphia Half Marathon race day on Nov. 18. I hadn’t been able to train for the race they way I wanted to, and If I wanted a speedy run, I figured, I should shoot for a slightly shorter run a few weeks after the half-marathon. 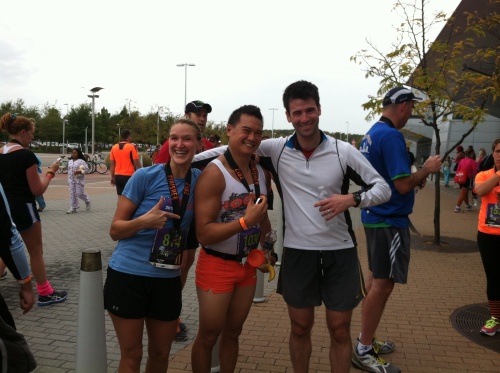 Posing with one of many costumed runners after the Wicked 10K.

The thing is, though, running fast just isn’t that important to me right now.

Here’s what is important to me right now: using running, and races, as a way to spend time with other fitness-minded friends and to honor my mental and physical health. I didn’t only sign up for this race to give myself a chance to test my speed, but because the race sounded like an absolute blast. The other J&A Racing event I participated in, the Wicked 10K, left me feeling excited and motivated to run more, and I wanted to feel that particular post-race high again. I also wanted another cool race T-shirt (a technical half-zip!), another serving of soup from the Baker’s Crust, and another post-run party with several thousand of my closest runner-friends, most of whom happen to be wearing costumes.

So this particular victory lap will be a celebration of the fact that I have managed to keep running through a difficult season, and have mostly (with a notable exception of mile 7 in Philadelphia) been kind and compassionate to myself as I ran through it.

My motivations for running on Saturday have shifted, so naturally, my race plan changed, too. My plan: Run the first 5K easy, likely around 10-minute miles, only running sub-9-minute miles if a mass murderer enters the course and chases me. Hold steady through mile 7, speeding up only if I feel good to the point of boredom at my current pace. If, and only if, I feel amazing, may I “race” the last 5K. If I’m already pretty tired when I pass the seven-mile marker, I simply hold steady and make it to the finish line however I can. My main goals: Feel strong. Have fun.