Last week, a TRX friend of mine had a tough decision to make. She’d hurt her calf muscle during a workout, and she knew she should probably lay low and let it heal. But she’d signed up for an 8K scheduled last weekend, and was part of a team that was counting on her. They’d even made team T-shirts.

My first reaction was to unleash a judgy, cranky lecture about how listening to your body’s whispers means it will never have to shout at you, and about how her calf was already speaking quite loudly.

My second reaction was to sigh, and give her a “well, IF you’re going to do it” talk (the kind you’d give to a middle-schooler about to TP your neighbor’s house), in which I warned her to be careful on the course, ice it afterwards, blah, blah, blah.

I also told her to make sure it was her Kerri Strug moment. Because here’s the thing: Injuries happen, and sometimes, we train and compete through them. Sometimes—like when Kerri Strug helped secure a gold medal for the U.S. women’s gymnastics team in the 1996 Olympics by continuing to compete on a badly sprained ankle—it’s even a good idea to compete through an injury.

We all want to be the Kerri Strugs of our own motivational head-movies. It’s cool to think about being that brave and that hard-core! But unless the event in question is really, really important to us, we’d be better off saving that toughness for another time. 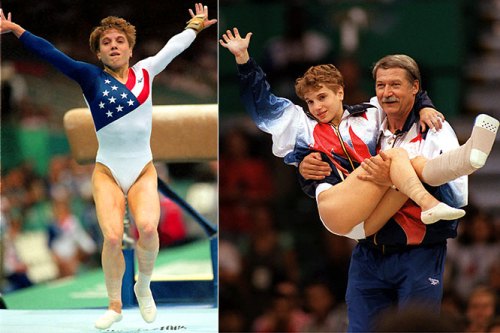 Kerri Strug gained sports-hero status by helping the U.S. women’s gymnastic team win a gold medal in the 1996 Olympics by competing through a bad ankle sprain. I’m not looking to replicate any part of her experience.

That’s kind of a long-winded way of saying that the Virginia Beach Rock ‘n’ Roll Half Marathon over Labor Day weekend was never an A-race for me, and that because I can’t even pretend it’s comparable to a Kerri Strug moment, I’m going to sit this race out thanks to a slightly twisted ankle (courtesy of the agility ladder at TRX class last week).

I’m highly optimistic that my ankle, which is actually 99.9 percent healed at this point, will be just fine in time to train for the Philadelphia Half-Marathon on Nov. 18. I’m doing some ankle-strengthening exercises to help it along. And with training for the Daiquiri Deck Tropical Splash 5K open-water swim on Oct. 6 going so well, I feel strongly that there’s no need to force a Kerri Strug moment for a race that’s not worth it.

My TRX friend, on the other hand, totally Kerri Strugged it last weekend, helping her team place fourth overall in the 8K. Her calf still hurts, but she says in her case, the prolonged pain is worth it.

How do you determine whether it’s worth it to train and compete through an injury? Are there cases in which you’ll do it, or do you always err on the side of caution?

3 responses to “The Kerri Strug moment”