Last time you heard from your favorite ski zombie, she was high on life after making a few little ski adjustments that made a big difference during her first weekend of ski-patrol ski-and-toboggan training. She was optimistic and enthusiastic. The best way to explain what has happened since then is in brief snapshots.

Tuesday night: I crash my OEC (ski-patrol medical) buddy Buck’s ski-patrol shift after two days of work in D.C. We take some runs, have some laughs and eat some dinner. Toward the end of the night, we help another patroller put an injured guest on a backboard, working together as if we were students again. “It’s like we didn’t skip a beat!” Buck says, and I agree.

Wednesday night: I am back on the mountain to work with one of the two main ski-and-toboggan instructors during his regular shift. It is pouring rain. The instructor eyes me warily. I glumly tell him I won’t ask him to ski with me, considering the weather. He suggests that we do some dryland exercises instead, hands me the two ends of a piece of rope, then proceeds to tug on the ropes as if they’re handles of a toboggan, so I get the feeling of being thrown off my balance while I’m steering it. A patroller I’ve never met before laughs as he watches us. “It’s like she’s a puppy, and you’re playing with her to tire her out,” he says. Later, I think about how I should have told him that like a puppy, I have tiny, sharp teeth that hurt like hell when I bite.

Thursday morning: I get some information that changes my understanding of how this year’s training will go for me—that it will be more rigorous and longer, and will require more time away from home, less of an accelerated program and more of a 2012 ski odyssey. Even as I realize this will ultimately make me a better ski patroller, I doubt for the first time my ability to get it done this season, or at all. I spend the rest of the day working on my snowplowing and side-slipping. I miss Steve. I miss home. I start wondering why this ever seemed like a good idea. Before he leaves for the day, the supervisor of the paid patrol gives me a concerned look and pats me on the back. “We’re going to get you there,” he says firmly. I try to believe him.

Thursday night: I join several other candidates in working with another ski-and-toboggan instructor on his regular shift. I am exhausted from the get-go after spending most of the day snowplowing and side-slipping, which is kind of like getting ready for an evening 5K by doing a speed workout the morning of the race. I feel like I’m struggling with even the most basic skills. Video analysis shows that I’m locking out my downhill leg during my turns, still sitting back in my skis. I spend the night willing my quads to work and willing my eyes not to tear up in frustration, succeeding at neither.

Friday night: I work the day shift in a Day-Quil haze, thanks to a cold I’ve caught while staying in the patrol’s bunk room, located in a ventilation-free room below the rental department. Steve drives up from Virginia Beach and arrives to find me curled up on the couch, fast asleep, while other patrollers’ kids watch “Snow Dogs” on the bunk room television. We go out for pizza. It is the first time I’ve left Whitetail for days, besides a few trips to the McDonald’s in Clear Spring, which has cell reception and WiFi for work sessions. I tell Steve about the week. He tells me I’ve lost perspective on the whole thing, and asks if I can hear how impatient, perfectionistic and self-deprecating I’m being, and how self-defeating that all is. I pout, and tell him to cut me a break. I know in the pit of my stomach that he’s right.

Saturday: I go through the second official S&T class still feeling terrible about myself, getting through all the drills but enjoying very few of them. This time, video analysis shows that I need to “loosen up.” In the afternoon, I ride the lift up with the instructor I’d worked with in the morning, who senses something’s wrong. He asks if I’ve been free-skiing at all since starting the training, knowing that I haven’t been. So we take turns following each other through some nice, soft bumps along the side of a run. It’s so much fun, I finish each section giggling. I have my best runs of the day, and manage to incorporate most of the skills I’ve been obsessing about. Turns out it’s much easier to ski well when you’re not in the middle of a nervous breakdown. I finish the day feeling hopeful and optimistic. 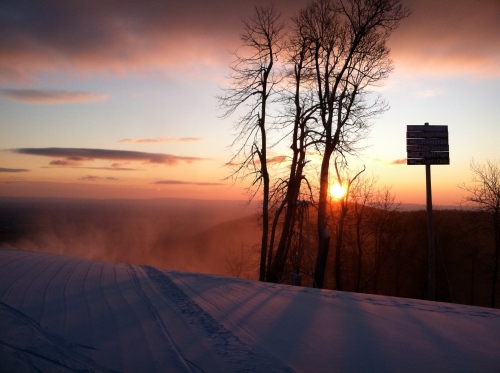 Once I accepted that there would be dark spots, everything seemed much brighter.

Sunday: On our way to dinner, Steve suggests I draw on sports-psychology lessons I’ve learned while training for various endurance events. As an example, he asks whether I ever doubted I’d finish my first marathon. He doesn’t expect me to say yes. I start thinking about how low I felt after my first-ever 17-miler, when I melted in the Florida heat and walked the last two miles, certain I could never finish a full 26.2. Then, I think about how I called my friend Sarah to tell her I wouldn’t be going to Nashville with her, and how she gently told me that it’s perfectly normal to feel awful during a long run, that the long run is sometimes just a dark point of training to be gotten through. I remember that a good training cycle isn’t about the absence of low points, but instead about how you handle those moments of intense self-doubt. When I start looking at some of the events of the past week as a perfectly normal dark point in training to be gotten through, everything ahead seems much brighter.

Monday: We stop at the DC Ski Center on our way out of town to shop for a new helmet and goggles for me. Steve suggests I stick around D.C. for the rest of the week to squeeze in a bit more training. I melt with gratitude, and take him up on it. So here I am.