My apologies for my recent hiatus. I’m back (at least in terms of my Monday-Wednesday-Friday blog-posting schedule), and do I have a story for you!

I’m at my parents’ place in Florida right now. This means lots of hot weather and lots of older folks, with all the erratic driving and early-bird specials the latter implies. The presence of a lot of older folks also greatly increases the chances that you’ll get schooled by someone old enough to be your grandpa, which is exactly what happened to me this morning.

When I’m here during the summer, I try to catch up with a master’s club that swims in the outdoor pool near my parents’ house from 5:30 a.m. to 7 a.m. daily. I drag my butt out of bed for the pre-dawn practice because the pool temperature is 88 degrees first thing in the morning with an aerator cooling the water down, compared to 91 degrees later in the day. With air temperatures above 90, with 99 percent humidity, that makes it medically inadvisable to swim at any other time. Seriously. You can’t breathe, and wonder if it’s possible to literally cook your skin in water that warm.

So there I was this morning, already red-faced and hot after my warmup. I was splitting a lane with an older gentleman swimming with a pull buoy, and he stopped to ask if I felt OK. He told me he likes the water that warm, and I thought to myself: “Of course you do. You’re 900 years old.”

I made a face that involved grimacing, laughing maniacally and fighting nausea all at the same time. My lane partner laughed.

I went back to my workout impressed and inspired, focused less on the hot water and thick air and more on the awesome people around me and beautiful sunrise above me. 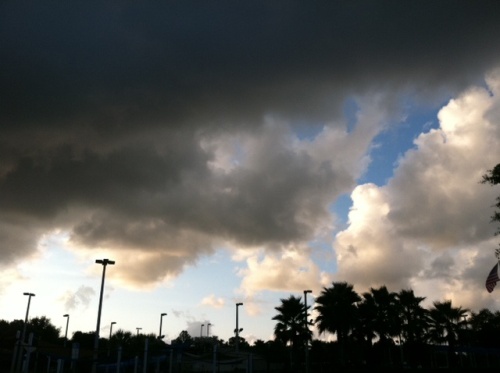 My iPhone photo doesn't do justice to the Florida sunrise I saw at the pool this morning—but it gives you an idea.

Today, I’m motivated by the idea that someone old enough to be my parent or grandparent is out there kicking butt, which means it’s possible for me to do the same when I’m that age. My morning dose of motivation comes as Olympic swimmer Janet Evans attempts a comeback to rival Dara Torres’, and as endurance swimmer Diana Nyad attempts to swim the Florida Straits, starting last night. Check out her training plan here.

Before the swim, 61-year-old Nyad said she hoped her swim would inspire the rest of us schlubs to continue challenging ourselves and pushing for our dreams throughout our lives. “I also want it to be a moment for thousands, and I dare say millions of people my age, who are going to look and say, ’60!'” she reportedly said.

By the way, I’m also motivated by what’s coming up this weekend: My swim leg of the Killer Honey Badgers triathlon relay team at the Luray International Triathlon!

What’s motivating you this week?