A bittersweet last weekend at Whitetail

Whitetail closes for the season on Sunday. For me, the last day of the season was last Saturday, as I’ll be out of town this weekend.

I had planned a long and reflective post about what I’ve learned this season, which consisted of hauling my gimpy butt around the mountain, and rubbing my own face in a goal I could no longer achieve (i.e., completing the ski-patrol training I started back in August, but could not complete because of an ACL tear, which came courtesy of a snowboarder). But I’m kind of bored with that. No matter how you spin it, it’s a little bit depressing and disappointing. Instead, I’m going to end the season briefly, with a pertinent quote and some fun photos.

This Ralph Waldo Emerson quote is sometimes the only thing that puts my anxious mind at ease before bedtime. Just substitute “ski season” for “day:”

Finish each day and be done with it. You have done what you could. Some blunders and absurdities no doubt crept in; forget them as soon as you can. Tomorrow is a new day; begin it well and serenely and with too high a spirit to be encumbered with your old nonsense.

And now, some photos, from Whitetail’s annual Heroes of the Hill ski race. Several four-person teams competed in the dual-elimination relay race. My candidate class put together a team, which included one candidate-to-be who was kind enough to take my place (each team must have one woman … making chicks on sticks a hot commodity the week before the race!).

Since our class motto is “Drop Your Drawers,”  the skiers raced in long underwear and boxers.

Another classmate and I watched from the sidelines. When our team got on deck, we cheered our heads off, and dropped our drawers, too. Sweet Steve suggested that racers tie cravats around their right legs in a visible shout-out to my gimpy knee. 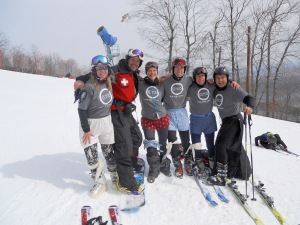 Our team didn’t win, but I’m going to go out on a limb and say we had the best costumes. 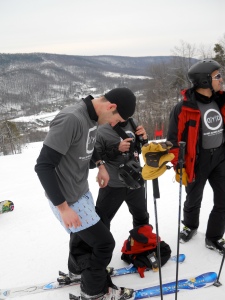 And now, by popular request, the story behind “drop your drawers:”

During a discussion about anaphylactic shock in our Outdoor Emergency Care class, a classmate asked for clarification about how to assist a guest in administering an EpiPen. Here’s how the discussion went down:

Instructor, simulating anaphylactic shock while standing in front of the class: Oh, no! I’ve been stung by a bee! Good thing I have my EpiPen! Now, what are you going to tell me to do?

Classmate, sitting in the front row: Pull down your pants.

The EpiPen *is* administered in the thigh, so it wasn’t necessarily bad advice. Still, the blunt command to “pull down your pants” became infamous in our class, morphing into “drop your drawers,” and leading to all of us standing on the side of a mountain in boxers in the middle of the winter.

Do you seek closure at the end of tough times? Or just finish each day (or season, or race, or whatever) and be done with it?

One response to “A bittersweet last weekend at Whitetail”