Runners often say the marathon is 20 easy miles followed by the hardest 10K of your life.

Today, the Marine Corps Marathon countdown series focuses on those final miles, and on the techniques that can help get runners through them. The series is based on a chapter from an old edition of Runner’s World’s “Guide to Running,” which advocates visualizing a marathon in manageable chunks during your taper to prepare to run the race in manageable chunks come race day.

Miles 20 and 21 take runners across the I-395 bridge and into Crystal City, where they’ll run a quick out-and-back into the city, turning around at the 23-mile marker and heading to the finish line — and the hill at the Iwo Jima Memorial before it.

It may be helpful to break this part of the race into three portions: the bridge, the two miles out and back in Crystal City and the finish. The bridge is a long, boring hill just when you need a flat, spectator-filled city street. Imagine yourself running hard, posting evenly paced splits and even picking up the pace a little, focusing on your breathing and your form. 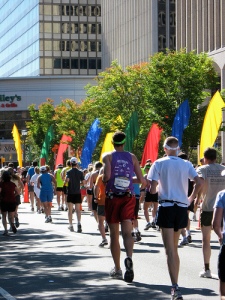 Happily, the end of the bridge means the start of Crystal City, where the course is flat and the sidewalks are packed with throngs of spectators. Lots of local running clubs set up through here, and offer snacks like gummy bears and pretzels. My favorite fan last year—the grim reaper, who held a sign declaring that “The end is near.” (Sadly, no photo!) Imagine yourself drinking this in, waving to spectators, giving high-fives to little kids with outstretched hands. These people are cheering for you, and the excitement in the air is palpable, because the end is, indeed, near. 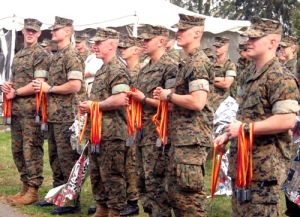 The final stretch is—well, it’s another boring stretch of highway with a steep .2-mile hill at the end. Here’s the part where you dig deep, and remind yourself of the months of training you’ve put in. These miles are tough, but you’re ready for them, because you’ve trained hard and raced smart. Imagine yourself running strong and steady to the finish, where you’ll use up your last bit of energy on the short-but-steep .2-mile hill before crossing the finish line and picking up your finisher’s medal.

This is actually the exact route of the Marine Corps 10K, which I’ll be running on Sunday. My is-it-broken-or-is-it fine toe still hurts, but running for the past couple days hasn’t made it worse. Sooo, Sunday should be interesting. After three and a half weeks of no running, the challenge might actually just be finishing the 10K. Wish me luck.

And if you’re running either race on Sunday, good luck!

Other installments in this series:

What motivated me to finish

One response to “Marine Corps Marathon countdown: visualizing miles 20 through the finish”