Motivation Monday: the ‘living in the moment’ edition

For the past week and a half, ever since I got to trade my cast for a splint, I have been going through my own personal “couch to 5K” training plan. Even after six weeks of no cardio at all following wrist surgery in February, I’ve been pleased to note that I have enough residual fitness to skip the actual couch to 5K plans — I’ve had no need to run-walk, and even my slowest, earliest jogs were faster than 10-minute-mile pace.

At the same time, it’s been a struggle to remain patient with a body that’s been working overtime on the business of healing. I thought that by this point, I would be back to typing with two hands, posting daily on this blog, training for a half-marathon on April 24, driving, and maybe even swimming to train for the Chesapeake Bay Bridge Swim. Instead, I am still navigating an awkward return to running, having Steve drive me anywhere I can’t take Metro to, and writing with the help of a speech-to-text program, with my right arm propped up on a foam block so swelling and soreness don’t set in.

Me in my "office." I've lost the cast since taking this picture, but kept the foam block and speech-to-text headset.

I want to be back to normal, like, now. The best way I have found to combat this impatient impulse is to make a conscious, constant effort to live in the moment; to focus on running while I’m running, on writing while I’m writing, and so on. For example:

During my recovery, I read What I Talk About When I Talk About Running by Haruki Murakami. The novelist took up running because he found it helped him hone the kind of focus that is essential to long-form writing. He considers his daily run part of his work schedule, in stark contrast to the guilt trips I send myself on when I take time out of my work day to run, despite getting to make my own schedule as a freelancer. Lately, I have been following Murakami’s lead, and using my daily workout as a way  to sharpen my focus and increase my energy–a side effect of any kind of exercise, at any speed. 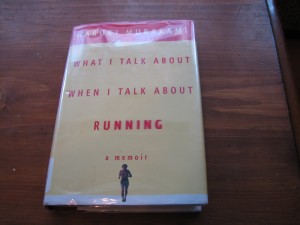 I have printed out yet another set of motivational quotes. The most pertinent one currently: “There is more to life than increasing its speed.” (Gandhi) 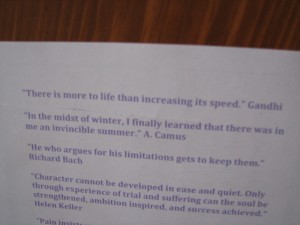 I have tuned in to the beauty around me on my runs. The Washington, D.C., region is swimming in pink this week, from the cherry blossoms downtown to the equally beautiful magnolia blossoms on my block in Silver Spring. I have made a special effort to notice and appreciate them, and to remember that you can appreciate the beauty of the natural world while running 9:30-minute miles, too.

Beautiful magnolia trees in bloom on my block.

Finally, I’m officially retooling my race schedule. I don’t get to start physical therapy until after my next appointment with my wrist surgeon on April 22, eight weeks post-surgery. No swimming until then, either. I’m starting to realize this means I probably shouldn’t be planning to throw my hand into the giant, frenzied, aqua-fist-fight that is the beginning of the 1-Mile Chesapeake Bay Swim in June. Nor should I be planning to run the hard, hilly Blue Ridge Parkway Half-Marathon in April, since my 5-mile group runs with Pacers Silver Spring still feel like marathons. Instead, I’m setting my sights on a few 5Ks and 10Ks: the Earth Day 5K in Silver Spring, the ZOOMA 10K in Annapolis on June 6, and the Clifton Caboose Twilight Run 5K on June 12 suggested by the race director, Gary, who suffered a similar injury to mine last winter. But I’m not signing up for anything until I feel good and ready–if I can be patient enough to skip working out entirely for six weeks, I can certainly be patient with myself for a few more weeks now.

Finally, thanks for being patient with me, and for continuing to stop by the blog despite the infrequent updates. Your comments boost my spirits, making me feel like I have my own personal cheering section in this slow, ugly race back to wellness!

13 responses to “Motivation Monday: the ‘living in the moment’ edition”